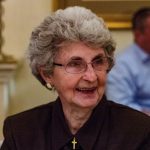 Born in the North End section of Wilkes-Barre to Irish immigrants, she was the daughter of the late Daniel P. and Anne (Geraghty) Roarty.

Ann Marie was a graduate of St. Mary’s High School, Wilkes-Barre, Class of 1949 and was employed as a seamstress in the area dress factories. She was a member of St. John the Evangelist Church, North Wilkes-Barre, until its closure and merger, and currently a member of Corpus Christi Parish, West Pittston. While a parishioner of St. John’s Church, she was a member of the choir, the decorating committee, and the social concerns committee. Ann Marie also volunteered at Meals on Wheels.

A Mass of Christian Burial will be held Monday, February 17, 2020 at 1:00 pm at Corpus Christi Parish, Immaculate Conception Church, 605 Luzerne Avenue, West Pittston, PA 18643, with Monsignor John J. Sempa, Pastor, officiating. Those attending the funeral mass are asked to go directly to church Monday afternoon. Inurnment along with her husband Fred will be held at the convenience of the family in St. Mary’s Cemetery, Hanover Twp. Family and friends may call Sunday from 3:00 to 5:00 pm at the Corcoran Funeral Home, Inc., 20 South Main Street, Plains, PA 18705.